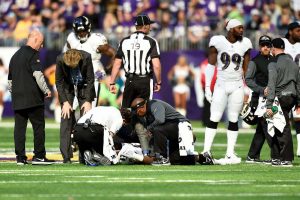 The first scene in Josh Begley’s short film makes it clear it won’t be a standard montage of helmet-rattling NFL collisions.

“Concussion Protocol” opens with a close-up shot of Broncos wide receiver Bennie Fowler III, his helmet off, in the moments after he sustained a concussion.

Fowler’s faraway look is apparent to viewers, who will spend over five minutes being provoked and pained rather than entertained.

“I didn’t want it to be a highlight reel of hard hits because those exist, and because those are very difficult to watch,” Begley said. “And in some ways, I feel like watching them desensitizes me more to what I’m seeing.”