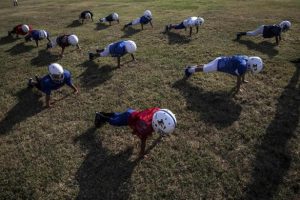 The degenerative brain disease known as CTE starts faster and earlier than previously recognized, as jolts to the head trigger abnormalities even in teenagers, according to new research led by Boston University and made public Thursday.

The scientists examined the brains of four deceased teenage athletes and found signs that CTE — chronic traumatic encephalopathy, a disabling condition blamed on blows to the head — had been set in motion days to weeks after a head injury.

They also described experiments in mice subjected to impacts similar to what athletes and soldiers experience, which showed that CTE starts to form right away, after even one hit.