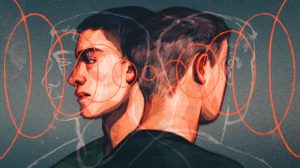 Chris Ferrari was just 18 the first time he balanced a rocket launcher on his right shoulder and aimed it at a practice target.

“Your adrenaline’s going and you’re trying to focus on getting that round to hit, and then you go to squeeze that trigger and, you know.”

The report is loud enough to burst the eardrums of anyone not wearing military-grade hearing protection. And the blast wave from the weapon is so powerful it feels like a whole-body punch.

“It’s exhilarating,” says Chris’s buddy Daniel, a former gunner in the Marine Corps who asked that we not use his last name to protect his privacy. “When you feel a concussive wave, it’s an awesome thing. It fills you with awe.”

It also may do bad things to your brain.