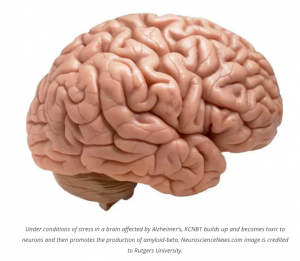 Rutgers researchers have discovered a new mechanism that may contribute to Alzheimer’s disease and traumatic brain injury. They now hope to launch a clinical trial to test the treatment in humans.

What causes Alzheimer’s is unknown, but a popular theory suggests a protein known as amyloid-beta slowly builds up a plaque in the brains of people with Alzheimer’s. But in a recent study in the journal Cell Death & Disease, Federico Sesti, a professor of neuroscience and cell biology at Rutgers Robert Wood Johnson Medical School, looked at a new mechanism, which involves a non-amyloid-beta protein, a potassium channel referred to as KCNB1.

Under conditions of stress in a brain affected by Alzheimer’s, KCNB1 builds up and becomes toxic to neurons and then promotes the production of amyloid-beta. The build-up of KCNB1 channels is caused by a chemical process commonly known as oxidation.

Link: Full Article – Possible Cause of Alzheimer’s and TBI Discovered