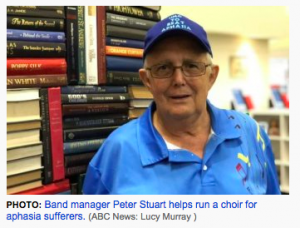 A person with Aphasia loses the ability to speak following a brain injury like a stroke, but the music therapy bypasses the injured brain cells using rhythm and memory to prompt the words.

Band manager Peter Stuart has mild aphasia and said it sometimes feels like the word he wants to say is on “the tip of his tongue” but he just cannot get it out.

“The brain is working but the mouth isn’t, you know what you want to say, but it’s just not there, it drives you up the wall,” he said.

“It is extremely frustrating, it got to some stages there where I had to play charades with my wife.”

The Sing to Beat Aphasia choir meets once a week to disturb the peace in the Logan City Library, singing anything from Queen to Bernard Fanning to get the words rolling.