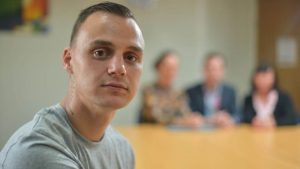 A head injury not only left Byron Schofield physically and mentally scarred for life – it also set him on the path towards prison.

The hammer blows landed, one after the other, on the side of Byron Schofield’s head. It was an August evening in 2010, a month after his 19th birthday, and he was walking through his home town – Liversedge, West Yorkshire – with his younger brother, Reece.

As they turned down an alleyway, they were followed by a group of men and without warning, one of them began swinging the hammer at Schofield.

Although his memory of the incident is fuzzy, he’s sure he had never met the attackers before, and they didn’t rob him – so why they did it is a mystery. No-one has ever been prosecuted.

Link: Full Article – ‘The head injury that made me commit a crime’