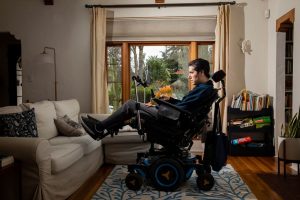 The last few times Ady Barkan got arrested in the U.S. Capitol building, the routine had a few new twists. Officers no longer handcuffed him, since he had lost nearly all his capacity for movement. They just put a bracelet on one of his wrists to show he was in custody.

His motorized wheelchair is heavy, and it can take a while to get it into the police van, so Aiyana or Nate or some other member of the large crew that supports him—Ady’s Roadies, they sometimes call themselves—will pour a little water into his mouth while they wait, or, following his whispered suggestions, fire off a text to news media or other activists.

Link: Full Article – The Most Powerful Activist in America is Dying