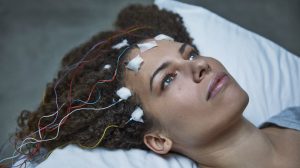 Jennifer Brea was a PhD candidate at Harvard University when flu-like symptoms and a high fever brought her down for more than five years.

After her condition stumped several doctors, the 28-year-old filmed herself on her iPhone, including an episode when she was unable to move or speak. She showed the footage to her doctor, and in 2012 – a year and a half after her initial fever – she was diagnosed with a condition called myalgic encephalomyelitis, or chronic fatigue syndrome.

Even though an estimated 836,000 to 2.5 million Americans suffer from ME/CFS, the disease is largely misunderstood and many sufferers have not been diagnosed. The annual federal research budget for the disease is $4 million to $6 million, which is slim compared to, for example, the nearly $109 million allocated annually to multiple sclerosis research. That’s part of the problem, Brea says.